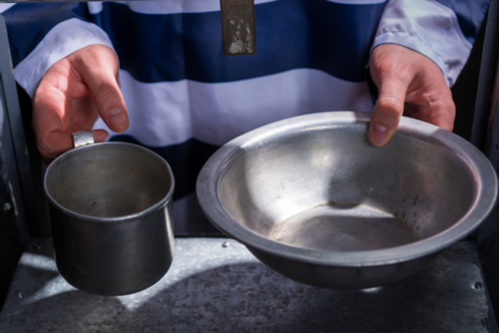 PRISONERS who claim to be vegan are being monitored by guards to make sure they are telling the truth.

It is thought some could be conning authorities in a bid to get higher quality food. Food prepared for special dietary requirements is seen behind bars as being of a higher standard.

Now bosses at HMP Ashfield in the UK have told staff to check vegans are genuine by finding out if they also avoid animal products when eating in their cells.

Some of the top-sellers in prison tuck shops or canteens include tins of tuna, Pot Noodles, and chocolate bars that can contain animal-derived ingredients.

An Independent Monitoring Board report on Ashfield, in Gloucestershire, said: “A number of prisoners have elected in the last year to go vegan and, as such, have been reminded that shop purchases will be monitored to ensure adherence.”

The average cost of feeding a prisoner in a UK prison is only £2 a day but more is spent on those who have vegan, vegetarian, halal and kosher diets.

Ashfield, which has a capacity of 420 inmates, has had 83 complaints about food in the last year, mostly over portion sizes and lack of filling in sandwiches and baguettes. But the inspection report also notes that special dietary requirements are “well catered for.”

It says there “remains an issue” for vegans because they are only able to buy a “significantly reduced” range of items from the shop—with many toiletries also containing animal products.

But vegans have been entitled since 2009 to buy in food, such as nuts and dried fruit from outside, to ensure they are getting enough nutrients.

Suspicions have previously been raised that prisoners at another jail are turning Jewish simply to get better food. The HMP Edinburgh inmates allegedly took inspiration from a character in TV comedy drama series Orange Is The New Black.