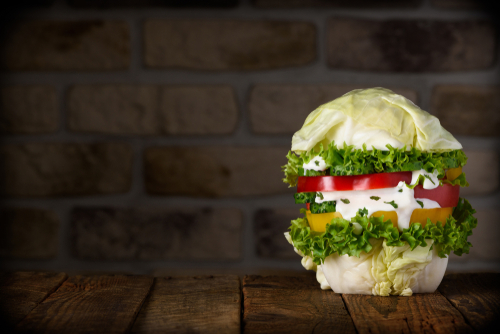 A woman claiming to be a vegan asked a takeaway assistant to spread mayo on her veggie salad.

She seemed stunned when he told her mayo contained animal products—egg whites—and therefore she wasn’t really a vegan.

Moments before the woman had told Subway worker Gabriel Caulfield-Bohlkentook to wear gloves to avoid meat residue on her food.

Vegans don’t consume meat or other animal products but the woman seemed ignorant of the real meaning of her lifestyle choice.

Mr Caulfield-Bohlkentook took to Facebook to highlight the hypocrisy of the woman and described his encounter.

He posted: “So I work at Subway, yesterday I had a chick come in, she told me she wanted a Veggie Delight.  As I went to get the bread she asked me if I could change my gloves cause she was vegan and I had been handling meat. “

“I did that, no problem, perfectly reasonable request. I get her bread, toast it and put all the veggies she wants on it, I start to wrap up her sandwich when she says ‘Can I get some mayo? I look at her, she’s looking at me, I pick up the mayo, I’m waiting for her to be like haha joke. Nothing.”

“Me: ‘You know mayonnaise has eggs in it right?’”

“THIS. GIRL. JUST. STOOD. THERE. SILENT. She stood there for a second.”

“She sounded so done, so defeated.”

“So I gave her her mayo, wrapped her sandwich up and charged her for her sandwich, she was silent the whole time. She took her sandwich and started walking out.”

A survey also found thousands of vegans admitted eating meat when they were drunk.

0 comments on “Can I Have Mayo with my Vegan Salad, Please?”