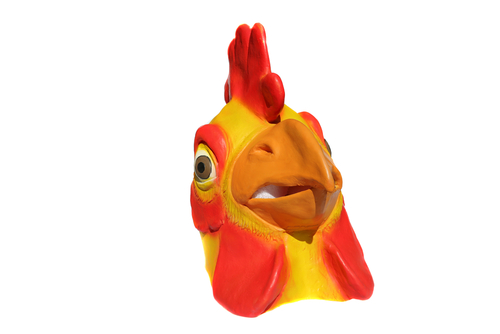 ANIMAL rights activists were mocked after wearing chicken masks at a Nando’s restaurant.

They donned the masks for a demo at a branch of the fast food chain demanding it go 100 percent vegan.

The activists, who called themselves as “Occupy Nando’s,” stormed in to the restaurant in Brighton, UK,  and began shouting and harassing diners.

Staff called police after being subjected to 20 minutes of abuse and disruption. Occupy Nando’s made no apology for causing a disturbance in the popular family restaurant.

Many on social media accused the protesters of trying to impose their extremist views on people in the UK and mocked them for being “stupid.”

One said: “Chicken masks – are they serious? Are they not undermining the dignity of chickens by doing this….I mean seriously…where will this nonsense end?”

Another said: “I’m sorry, I’m not vegan nor do I intend to be. But telling restaurants to go vegan? It’s not down to you. People will eat whatever they like – if you don’t like it go to a vegan restaurant, end of story.”

One of the protestors said: “We urge Nando’s to turn their entire menu vegan, we want total animal liberation.”

A spokesperson for Nando’s said: “We are sorry for those customers who had their meals interrupted. We worked with the local police to minimise any disruption in a peaceful way and allow our customers to enjoy their meal and have a great night.”