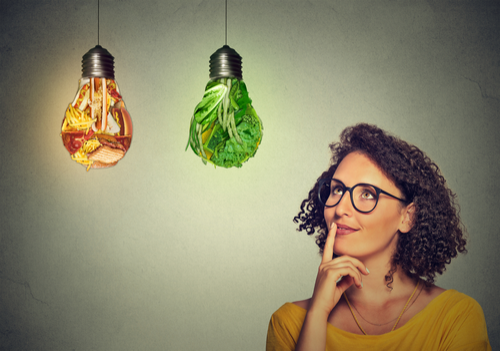 Half of vegetarians and vegans only stick to their diets on weekdays, a new report claims.  According to a survey by UK supermarket chain Waitrose vegans tell work pals they are 100 percent vegan.

But at the weekends and on special occasions they opt for a meaty alternative.

The report identifies so-called “flexitarians” which it says now account for around 21 per cent of UK consumers.

It means they eat a largely vegetable-based diet which is supplemented occasionally with meat.

The report states: “Some animal rights activists are veggies only on weekdays; some only when they’re sober; some choose to support the slaughter of sentient beings ‘on special occasions.’”

The Waitrose report is based on research among shoppers across all British supermarket chains. The retailer’s executive chef, Jonathan Moore, said: “Vegetarianism has grown and evolved. More people dip in and out of it.”

“There was a time when choosing a plant-based diet was about taking an ethical stand based on unwavering principles. For many, this distinction between vegetarians and meat-eaters still exists but for others the lines have blurred.”

The number of vegans in the UK, who shun all animal products including dairy and eggs, has grown fourfold in the past four years from 150,000 to 600,000, according to the Vegan Society.

Waitrose was the first UK supermarket to install dedicated vegan sections in 134 of its stores in 2018.

0 comments on ““Flexitarians” Are the New Vegans”