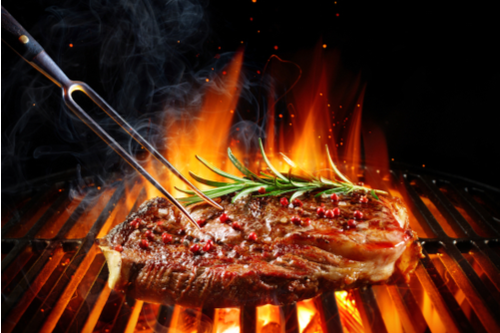 A CONTESTANT on a hit TV show who claimed to be vegan has been caught eating meat by viewers.

Singer Fleur East came under fire after widely claiming her veganism before appearing on the jungle reality show I’m A Celebrity Get Me Out of Here.

But she was seen openly eating meat from a wallaby—a type of small kangaroo—as she chatted to other contestants on the show.

But one viewer tweeted: “HANGGGGGG ON. Fleur is not doing the eating trials because she’s ‘Vegan’ but I’ve just seen her chowing down on a wallaby wing?”

Another angry vegan wrote: “Thought Fleur was vegan? “Why’s she eating wallaby. What an absolute let down.”

But it later emerged the singer has ditched her veganism for the series and will eat whatever is put in front of her.

Fleur East’s team added in a tweet: “Just to address, Fleur is not a vegan. For health reasons she has in the past followed a vegan diet, but she is not adhering to this in the jungle.”

In September last year, she excitedly told her Twitter followers: “So I’ve been vegan for over a month now and I feel amazing.”

Reports had also suggested she and other contestants may  not be taking part in the Bushtucker Trials which involve eating bugs and insects.

Contestant James McVey, a singer from band The Vamps, has requested to be given tofu instead of meat during the nightly meals.

While no one has yet requested to be exempt from trials on the grounds of being vegan or vegetarian, campmates have the choice not to eat meat in the trials or to exit the trial altogether.

During the eating trial, the contestant is presented with something unappetizing to eat, and told if they can stomach it, they win a “star,” representing a meal for the camp.

ITV exempts celebrities from challenges on medical grounds but has not had to do so for vegans since the show’s inception, as celebrities can merely refuse to eat the meat on offer.

Celebrities choose between themselves who is sent off to do the trial—so it is unlikely they would be sending the tofu-eater off to compete in the eating challenge.

Vegans have protested I’m A Celebrity for using animals in their trials. In some challenges, contestants are asked to eat fish eyes, live bugs, cockroach milkshakes, and crocodile penises. Other trials involve tanks filled with live animals, including snakes and spiders.

The Vegan Society has asked the show to make the jungle “vegan-friendly” and implored it to “stop using animals for entertainment,” while hundreds of animal rights activists have complained about the show’s use of animals on Twitter.