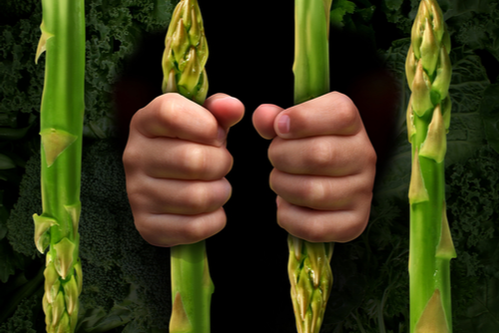 A PRISONER who attacked his cellmate over his “aggressive” vegan views has been jailed for a year.

A court heard John Hutton snapped over Duncan McLaren’s obsessive veganism and he punched him. McLaren’s views were said to have made him unpopular with other inmates at Perth Prison, Scotland, and Hutton assaulted him after two weeks in the same cell.

Sheriff William Wood said the victim had “declared quite an aggressive form of veganism.” Perth Sheriff Court was told that McLaren threw out dairy food items belonging to Hutton when they were delivered to the cell.

Alistair Burleigh, defending, said: “His aggressive form of veganism had led to some difficulties between them. That included the destruction of certain food items that had been brought into the cell for breakfast. He had been in the cell for two weeks.”

The court was told that Mr McLaren was so “anti” dairy products that he would throw eggs and milk in the bin as soon as they were delivered.

Hutton, 35, from Dundee, admitted attacking McLaren on March 14 by punching him on the face in an incident captured on CCTV.

Mr. Burleigh added: “Nobody wished to share a cell with him. “He was very vocal about his belief that there should be no milk or dairy products in his cell.

“He got upset if there were eggs in the cell. If eggs or milk were delivered, he would put them straight into a bin. After two weeks, my client went to the prison staff to say McLaren was driving him crazy. The prison staff understood because it was a common request by most of his cell mates, but they couldn’t move him on.”

0 comments on “Prisoners in Vegan Punch-Up”