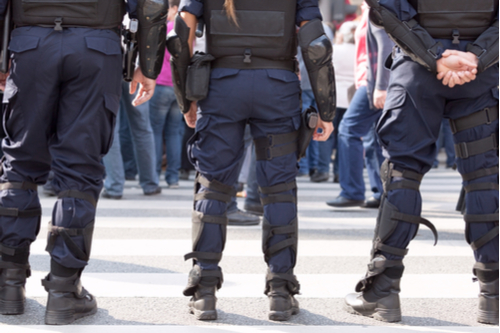 COUNTER-terrorism police have been called in to help protect people working in the meat industry from increasingly extreme protests by militant vegans.

Farms, abattoirs and factories have been subjected to vandalism, and owners and staff sent death threats during an alarming increase in incidents. In one case, protesters accused Jewish workers at a kosher abattoir of being “Nazis.”

Police already have a long history of dealing with animal rights activists who target those involved in the meat industry. But now officers are concentrating on the vegan threat in the UK.

The market is estimated to be worth £443million ($565 million) in Britain alone.

But some vegan campaigners want the UK to become a meat-free society and are going to extreme lengths to achieve their goal. The National Pig Association and the British Poultry Council are among the organizations being advised by specialist police.

He said: “There were threats to rape my wife, tie her up and cut off her genitals.” Jewish workers were branded Nazis when members of vegan group SAVE began protesting outside kosher Kedassia abattoir in London in the UK two years ago. Some broke in and daubed the walls of the abattoir with anti-Semitic slogans, it has been claimed.

One protestor is said to chanted: “It’s a holocaust. You Nazis!”

SAVE admitted on Facebook it was responsible for daubing Holocaust images, initially suggesting the use of the term was justified, but it later apologized.