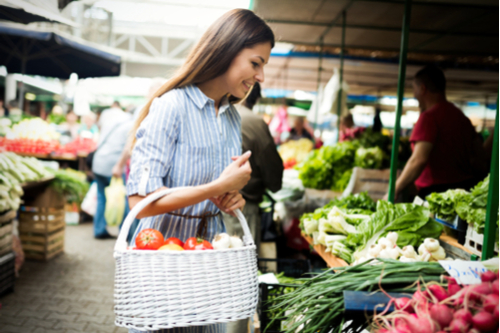 ANGRY vegans are now targeting ethical food markets that source food from farms with the best animal welfare practices. Vegan protestors accused one shop of “false advertising” over the sale of its dairy products.

They targeted a store called HISBE—How It Should Be—in Brighton, UK, which sells products it claims are “thoughtfully sourced from small, local producers and brands that trade responsibly, fairly and sustainably.”

But that didn’t stop activists from Direct Action Everywhere who attempted to intimidate staff and customers by chanting slogans with the use of megaphones.

About 30 protesters lined the aisles and stood outside holding signs with messages such as “local doesn’t mean ethical.”

Another poster inside the shop read: “Animals’ lives are their right. Killing them is violent and unjust, no matter how it’s done.”

The mob of angry vegans accused the business of “unethical” practices and “false advertising” because it claims to sell “happy” meat, eggs and milk.

She said: “We passionately oppose factory farming and encourage people to consume less, better quality meat. We are committed to ethics-led sourcing and, to us, this means we sell local and high-welfare meat, eggs and dairy products.”

“On the other hand you have these vegan activists, who think that it is morally wrong for HISBE to sell animal products, full stop. To the vegan activists, slaughtering an animal for food is the same as murdering a person – it’s irrelevant to them how the animal lived its life if that life is ended prematurely.”

Ms. Anslow claimed it is the second time her shop has been targeted.